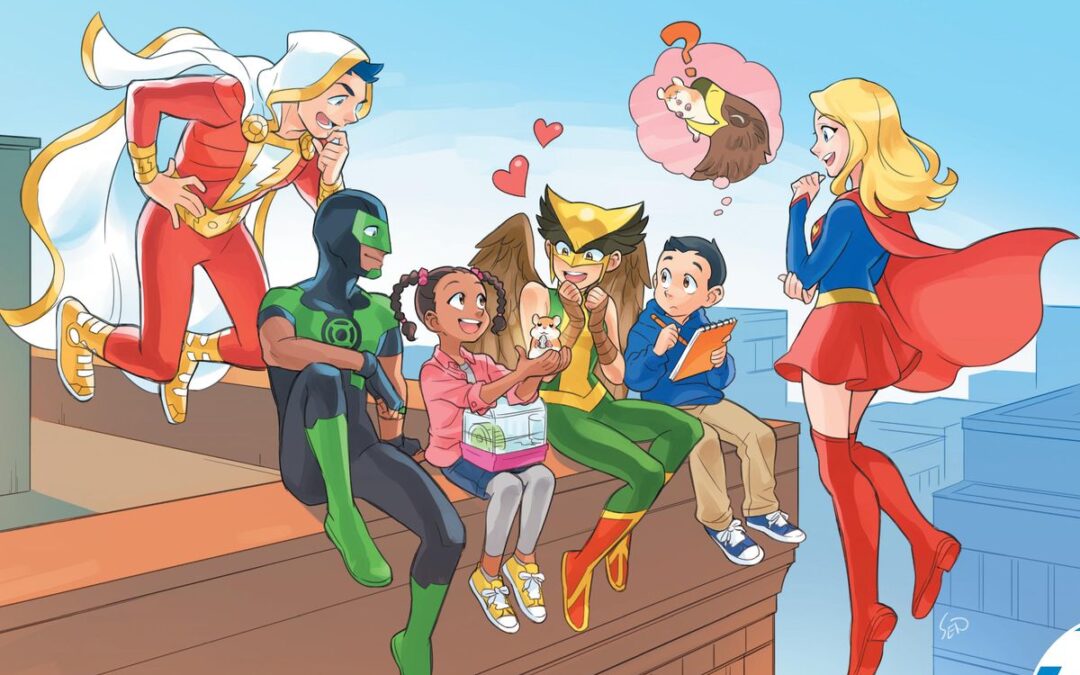 Sometimes being super just runs in your blood, which is especially true of these superhero kids. You know the ones, the mostly super kids of superheroes, the likes of which include Miles Morales. He’s a long time hero in his own right, after all, following in the footsteps of Peter Parker. But it’s not all about Miles Morales, so without further ado, here are the 11 best kid superheroes in comics.

Jon Kent, a.k.a. Superboy, is the son of Superman and Lois Lane. In the early days of “Rebirth,” his adventures with his dad were the central story of Superman.

However, Jon went into space where he encountered an anomaly that aged him several years, returning him home as a teen rather than a young boy.

Now, he and his father are rekindling their relationship after some time apart – and Jon is growing into his own hero, even preparing to journey alongside the Legion of Super-Heroes as his father once did.

The spectacularly named Malcolm Dragon is one of the few superheroic kids who managed to grow up relatively normally, as long as you include the occasional bout of action, all-out battle and disappearing parents due to parallel universe shenanigans “normal.”

Despite all of that, though, he’s well-adjusted, a little uncertain and one of the more believable kids in superhero comic books, as long as you can get over the green skin and the fin on his head. Not for him, teenage rebellion and smirking at authority; instead, he’s even taken over the family business at a worryingly young age – even becoming the titular star of Savage Dragon, replacing his father.

Laura Kinney is more of a cloned daughter than a birthed one, made by splicing the DNA of Wolverine and D.r. Sarah Kinney… but she’s his genetic successor, and possesses most of his abilities, including indestructible adamantium claws.

Laura, or X-23 as she’s currently known, was once the one-and-only Wolverine, and up until recently anchored her own title.

Wally West is himself a super-kid – though he’s Barry Allen’s nephew, not his son. But in the Kingdom Come continuity, he passed his original Kid Flash mantle on to his own daughter Iris West, herself a super-speedster.

One of the breakout characters of Kingdom Come, Iris lived on well past the initial series in subsequent follow-up stories.

One of the most popular kids of a superhero out there, ‘Mayday’s’ appearances come and go.

In the MC2 corner of things, Mayday Parker grew up to be a superhero that literally couldn’t be kept down, no matter how many times her comic was cancelled.

It’s easy to see why. She managed to be reminiscent enough of the original Spider-Man stories without being a carbon copy, and added an individual touch that appealed to readers of all-ages.

A different version of Peter and MJ’s daughter – this one named Annie – recently co-starred in Amazing Spider-Man: Renew Your Vows, fighting crime alongside her mom and dad.

But Invincible still counts as super-progeny, quickly growing into a hero in his own right, and ultimately defeating his now evil father. But Invincible’s family troubles didn’t stop there. He soon discovered a younger half-brother named Kid Omni-Man, who inherited their father’s powers, and mean streak. Fortunately, after changing his name to Young Omni-Man, he began working to redeem his father’s legacy to the people of Earth.

Invincible’s legacy recently came to a close, as the series ended with #144.

As one of the first examples of superhuman offspring, it’s no surprise that Franklin has seen it all in a lifetime that’s both short and surprisingly long (He’s been around since 1968!).

He’s grown older, grown younger, meet a future version of himself as an adult, had godlike powers and lost them and regained them, joined Power Pack for awhile and even got to save the world on a couple of occasions and all of this before puberty. If Reed and Sue think he’s been trouble so far, wait until he starts dating.

As for his sister Valeria, her incredible intelligence makes it tough to remember that she’s often portrayed as being as young as three years old. Valeria’s history is just as convoluted as Franklin’s, having initially died when Sue Storm had a miscarriage. Saved by Franklin’s reality altering powers, Valeria was raised in an alternate reality by her father’s nemesis Dr. Doom, whom she still calls “Uncle Doom.”

Now the pair are often in action alongside their family in the Fantastic Four – though sometimes the kids have to sit it out.

The original Huntress had a simple, yet wonderful, high concept: What would the daughter of Batman and Catwoman be like?

As it turned out, the answer was “dedicated” and “a fan favorite.” After restoring her mother’s honor by uncovering the truth about a doctored photograph that apparently showed Catwoman murdering a cop, she went on to join both the Justice Society and Infinity Inc. while continuing her work to keep her father’s legacy intact – and Gotham free of crime.

Another descendant of the Bat-family, Damian Wayne is the biological son of Bruce Wayne and Talia al-Ghul, though he was created through genetic engineering. Despite his training as a ruthless assassin, Damian has proven time and time again that he is his father’s son, a dyed in the wool hero who would – and has – made the ultimate sacrifice for the greater good.

Damian has been a major part of the Batman mythos since well before the New 52, and now anchors Teen Titans.

Almost certainly the poster boy for confused and convoluted superhero offspring continuity, Cable is (deep breath) the child of Cyclops and a clone of his first true love that was created by an archnemesis, a child who was sent to the far future after becoming infected with a techno-organic virus, but eventually returned to his home time as an adult, where he came into constant conflict with his father, who didn’t realize his son’s true identity.

You just know that, somewhere, some soap opera writer is looking at Cable’s backstory in awe and envy, wishing that they could create something so amazingly byzantine and melodramatic. And we’ve not even gotten to the bit where Cable went back into the future with the messiah of his entire race!

Cable’s game changed again when his younger self from an alternate timeline killed and replaced the older, more familiar Cable. Phew.

Scott Lang’s daughter Cassie is a longtime supporting character in the Avengers world, even living with her dad at Avengers Mansion as a kid. But after Scott perished in “Avengers: Disassembled”, Cassie used his inherited Pym Particles to become the growing hero Stature – a founding member of the Young Avengers (alongside Speed, Wiccan, and Hulkling – also potential inclusions on this list).

Cassie died as Stature though, fighting Doctor Doom. But her death wasn’t in vain – her father came back to life during the fight.

After Cassie was eventually resurrected (comics is like that), she switched identities to the Wasp-esque Stinger and began superhero-ing alongside him. She’ll co-anchor a new title alongside Scott Lang next year.